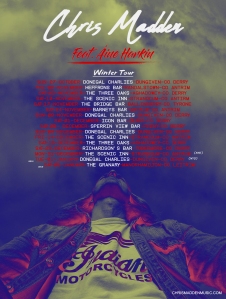 Betty Don’t just featured on John Kerr’s Country Show on BBC Radio Ulster, check it out on the iPlayer below. 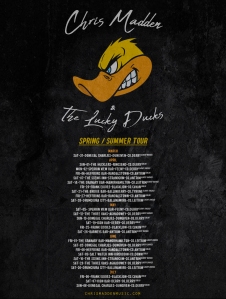 Massive thanks to everyone who came out to see me & the band on The Just Drive Tour, we had some really great nights, hope to see y’all soon! In the meantime check out this playlist off originals & covers from the tour.

On Saturday the 1st of December we will embark on a 6 date Northern Irish Tour, featuring Connor Kearney & Aine Harkin on select dates.

On Saturday 23rd of September we will embark on a 12 date Northern Irish Tour, featuring Connor Kearney & Aine Harkin on select dates. 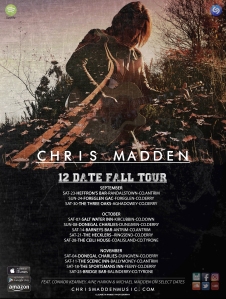 On Saturday the 3rd of June we will embark on a 23 date Irish Tour, featuring Connor Kearney, Michael Madden & Aine Harkin on select dates.

Check out this awesome review from Al Gilmore at Chordblossom, it made my day! 🙂  Playing your own brand of country music in pubs, clubs & dive bars across the country, to people who think think Nathan Carter & Ritchie Remo are the be all & end all of the genre can be a real struggle at times, so a review like this is a breath of fresh air & massive boost, hats of to the reviewers & the people who take the time to listen, cheers! :)🤘     Check Out The Actual Review Here       Watch          Buy

“This Ain’t Your Daddy’s country music” Thanks to Noelle Ellis from Gigging NI for the killer review of my new single Worlds Gone To $h!t.  It’s great when someone just gets it

My new single Worlds Gone To $h!t is out now!  Get it on iTunes for 79p!  Also available on Google Play & Amazon.

Worlds Gone To $h!t – Irish Tour
Chris will embark on a 22 Date Irish Spring Tour Supporting the new single “Worlds Gone $h!t” starting on March 3rd in Frank Eddie’s Co. Cavan & ending on May 21st in The Slip In Co. Down.  Connor Kearney & Aine Harkin will feature on select dates.

A big thank you to everybody who came out to see me & the band on the 2017 Extended Winter Tour, it really means a lot too see familiar faces and new ones at your shows night after night, without you we couldn’t do what we do, so thank you all so much and we’ll see you in the Spring!  Thank also to all the venues who booked us as well 🙂

A big thank you to everybody who came out to see us on the Extended Winter Tour & the venues who booked us! It means a lot! ✌️🤘 @kearney_connor @ainnee12 #thankyou #grateful #tour #recap #northernireland #2017 #video #live #country #music #countrymusic #rocknroll #punk #gibson #marshall #chrismaddenband 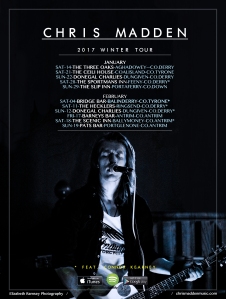 My song “Crazy Bars & Fast Cars” from my debut EP of the same name will feature in a BBC Documentary “Love In A Day”.  It will be broadcast on BBCNI on Monday the 6th of February at 22:40.  Thanks to the BBC & everyone involved for including my song, it means a lot!

Chris will be embarking on a 10 date Northern Irish extended winter tour, kicking off on Saturday 14th of January in The Three Oaks & ending on Saturday 18th of February in The Scenic Inn.  The tour will Feat. Connor Kearney on lead guitar on select dates.

Connor Kearney will accompany me on lead guitar duties for the remainder of the On The Road Again Irish tour, from the 3rd of September to the 31st of December.  Connor played 25 dates of the Crazy Bars & Fast Cars tour last year & a few select dates this year as well, so he is no stranger to the setup, we look forward to having him on board. 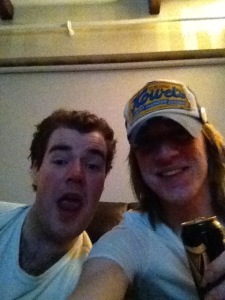 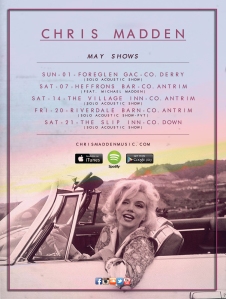 Just Drive, a new song I co-wrote with David Lyttle is featured on the Nerve Centre‘s album Scenarios, it’s an album of emerging and established artists from Northern Ireland, Feat. VerseChorusVerse, Jessica Doherty, Rosborough & many more, be sure & check it out!  The album is set for release in early June.  Links Below. 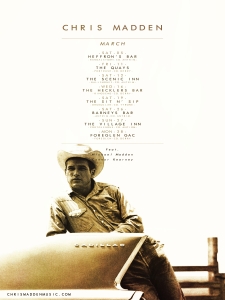 Here is a Live cover of Chuck Berry’s Run Rudolph to get you into the christmas spirit, feat Michael Madden on lead guitar & vocals.  Michael will be playing all dates with me over the christmas period, so be sure & catch a show!

So i’ve been asked to do this song for a while, most recently on Sat night, not naming names, Jackie Mullan lol So I gave in, changed it up a little & recorded this in rehearsal, so here ya go